Ashiok is a being that may have been human once, but if so, that time is now long past. Ashiok resides on Theros, but does not come from Theros. Ashiok has come because of the strong power of devotion and belief of the plane’s mortals, and of its effect on its gods and Nyx. There is something special about Theros, and Ashiok seeks to reap this unique advantage.

Unlike the gods, Ashiok is not one to seek to become the object of belief. Instead this otherworldly mage seeks a twisted mirror of belief, the smoke and screams that waft from the cold corners of dream: Ashiok is a mage of nightmare.

Ashiok’s power is to reach into the beliefs of others and find the fears that dwell inside. Ashiok knows that if fond thoughts of a god have power, then the dark phantasms spawned of fearing that god hold even more: where there is belief, there is doubt, and where there is doubt, there is the nightmare. And the world of Theros is a world full of believers.

With this power, Ashiok can summon beings born of nightmares, call them into reality, give them form. They become Ashiok’s minions, eager to please their master, freed from the dreams of the believer.

Over time, Ashiok’s power has taken a physical toll. The mage’s face has fallen away to smoky shadow. Nightmarish wisps swirl where a skull may have once resided. That these are no longer required is part of Ashiok’s enigma, and testament to the unnatural power Ashiok wields.

The nightmare weaver’s agenda is not yet known. Whether Ashiok comes to Theros for personal purposes, or as an emissary of some further force, is unclear. What is clear is that this mage is dangerous, perhaps to Therans in particular.

A cunning artist of dreams, Ashiok uses mystical influence over unconscious thought to conjure aesthetically pleasing nightmares. Ashiok's most recent and most thrilling achievement was to alter the dreams of the god Ephara, conjuring a kind of ephemeral dream-deity. This feat was made possible thanks to a favor from the god Phenax, allowing Ashiok to remain hidden from Ephara's divine view.

"Knowledge is such a burden. Release it. Release all your fears to me." -Ashiok, Nightmare Weaver (Thoughtseize)

"Every nightmare is a caged bird that yearns to be set free." -Ashiok, Nightmare Weaver (Ashiok's Adept)

"To think some believe it peaceful to die in one's sleep." -Ashiok, Nightmare Weaver (Nightmarish End)

"It saddens me to lose a source of inspiration. This one seemed especially promising." (Mind Rot)

"Not all nightmares can be escaped by waking." (Tormented Thoughts) 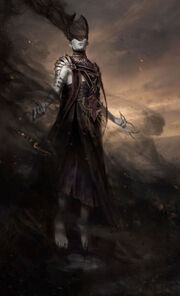 Retrieved from "https://gamelore.fandom.com/wiki/Ashiok?oldid=60332"
Community content is available under CC-BY-SA unless otherwise noted.