This article is about the three-headed dog which guards the Underworld in Greek myth.. For other uses, see Cerberus (disambiguation).

Cerberus is the giant three-headed dog that guards the Underworld in Greek Myth. In addition to his multiple heads, Cerberus sometimes is depicted with other monstrous features, such as a serpent's tail, a mane of snakes, and lion's claws. 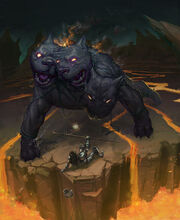 Retrieved from "https://gamelore.fandom.com/wiki/Cerberus?oldid=84990"
Community content is available under CC-BY-SA unless otherwise noted.