Chandra Nalaar is a red-magic-wielding planeswalker. Her specialty is pyromancy: spells of fire, fire, and more fire.

There's no virtue in subtlety - at least not as far as the fire-mage Chandra Nalaar is concerned. Impulsive, passionate, and short-tempered, she's as ready to explode as the pyromantic spells of her ever-growing repertoire. Chandra's spark ignited when she was still quite young, and as she has grown, so have her abilities as a wielder of fire magic and as a planeswalker.

As a source of immense and unpredictable power, authority figures have sought to restrict and control Chandra, which comes into direct conflict with her need for independence and freedom. As Chandra's wild inner fire comes in contact with world after world of rules and strictures, the results are sure to be explosive.

Chandra recently faced the shamanic Planeswalker Ramaz, a crazed visionary who was responsible for tipping her off about the enigmatic dragon scroll. The scroll led her to Zendikar and the Eye of Ugin, ultimately leading to the release of the Eldrazi. Chandra tracked Ramaz across many worlds to get some payback for using her in his schemes. He ultimately escaped after their battle on the plane of Kaldheim, but she did learn that Ramaz's scheme traced back to the dragon Nicol Bolas. She lacks the information—and the patience—to follow the trail any further. For now, she has returned to Regatha, to the fire monastery where she first trained as a pyromancer.

"So many have died in search of that map. And now it appears in the hands of the arrogant child Chandra Nalaar." (Anowon, the Ruin Sage)

Chandra never believed in using her "inside voice." (Chandra's Outrage)

"Which do you think is a better deterrent: a moat of water or one of fire?" -Chandra Nalaar (Circle of Fire)

"‘Utterly' is my favorite way to destroy something." —Chandra Nalaar (Craterize)

"You're in luck. I brought enough to share." -Chandra Nalaar (Flames of the Firebrand)

"Spontaneous combustion is a myth. If you burst into flame, someone wanted you to." -Chandra Nalaar (Incinerate)

"Those who wish to invade our monastery, please take it up with my servant." —Chandra Nalaar (Inferno Elemental)

"Lighting a fire needs kindling and heat. You be the kindling. I'll bring the heat." -Chandra Nalaar (Magma Rift)

"Who'd want to ignite things one at a time?"—Chandra Nalaar (Pyroclasm)

"I like it here. You always get a little more for your mana." -Chandra Nalaar (Rumbling Aftershocks)

After the fourth time Chandra left a place engulfed in flames, she decided to just go ahead and make it her thing. (Seal of Fire)

"The land here seems go out of its way to kill you." -Chandra Nalaar (Seismic Shudder) 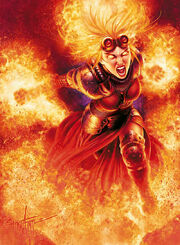 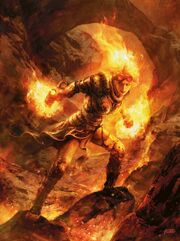 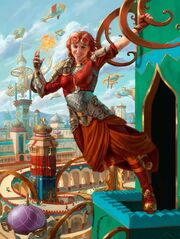 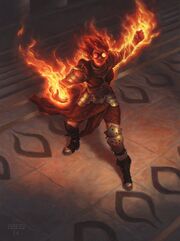 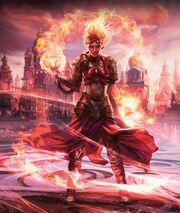 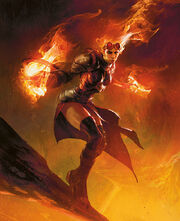 Retrieved from "https://gamelore.fandom.com/wiki/Chandra_Nalaar?oldid=90657"
Community content is available under CC-BY-SA unless otherwise noted.