Subtype or Variant of

The race of dragon-men, the Draksar were once human, but are now almost entirely reptilian in nature. They possess great strength, and are capable of breeding new combatants rapidly. As a consequence in the half-century that has followed the Catastrophe the Draksar have more than made up for the loss of life following the Catastrophe, allowing them to assemble the largest living army in the land.

The Draksar are taught, from an early age, to fight together. A soldier that strays from his unit is severely punished. No Draksar is exempt from this.

The Draksar believe in a dragon that governs Valdac and Vindrax; this being is the Dragon God. The staff of the Dragon God is said to hold a slight amount of his immense power.

It is no secret that the Draksar covet their draconic blood. With great focus some have even been able to ascend to a true dragon form at will, if only for a while.

The priests of Valdac gave their sermons from the books of the Dragon-Gods, of the Creator and the Destroyer. It was the one shred of their Soft-skin ancestors they could never release.

Akakios and his broodqueens built their legions with one purpose; to take his vengeance on us. - Priest of Valdac

To the Draksar, words held power. With words alone, one could bring a foe to its knees. Words could dissolve a kingdom and raise a new one in its place.

Countless texts were destroyed in the Draksar's war against slander. Valdac's history was a casualty.

The traps created by the Draksar craftsmen are filled with the concentrated venom from the Cobra Spitter. It is the nora mixed with the poison that causes the magical blindness 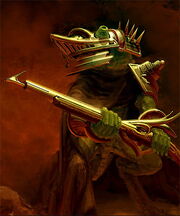 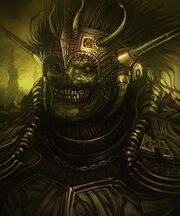 Retrieved from "https://gamelore.fandom.com/wiki/Draksar?oldid=80412"
Community content is available under CC-BY-SA unless otherwise noted.