Dralnu, a necromancer lich from Urborg, joined the Coalition against the Phyrexians during the Invasion. His main contact in the Coalition was the metathran commander Agnate. Although they were allies, Dralnu infected Agnate with a plague that would enable the lich to slowly turn the metathran commander into one of his own undead minions. Agnate caught onto Dralnu's plan, however, and had the minotaur Grizzlegom take his life to spare him from undeath.

"I confer with Death itself. What could you possibly do to injure me?" -Lord Dralnu

"Do not weep at your defeat, my dear. In death, you will serve a greater purpose -mine." (Lord of the Undead)

"I bless the living with a song of death." -Lord Dralnu (Sinister Strength)

"Do not fear death. I shall release you from the eternal bonds and bring you glory." -Lord Dralnu (Exotic Disease) 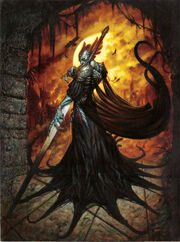 Retrieved from "https://gamelore.fandom.com/wiki/Dralnu?oldid=21501"
Community content is available under CC-BY-SA unless otherwise noted.