In times of war, not all parties are as quick to take sides. The Drokka are ancient creatures with no understanding of war. This great conflict brought them out of their slumber in the Deepwood, a vast forest mostly uncharted.

The Drokka’s curiosity was well met by the Ardent and Underworld ambassadors who were quick to try and win their support. The Drokka possess powerful earth magic able to bolster and energize troops beyond the capability of Hexing gems. Scholars from both factions had heard rumors of this and advised ambassadors to approach the Drokka with caution.

As both sides continued to try and win the support of the Drokka, they turned inward looking to nature as a guide for their purpose.

The Drokka sensed they were being manipulated by both sides and called out to Entrath. Entrath answered their call awakening their god the Drokkotar. It was clear that winning over the neutral factions of the world wouldn’t be as easy as anyone thought.

Seeing his massive form walk amongst the comparatively minuscule trees and birds demonstrates the power these creatures have at their command.

The war forced the reclusive drokka out from their deepwood dens. The drokka did not understand war, so they were exploited by both factions.

Weary of being pawns in the war, the drokka awoke their god to protect them. 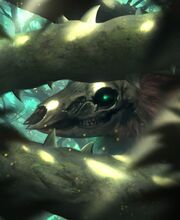 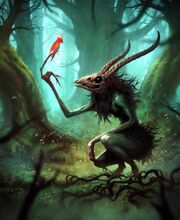 Retrieved from "https://gamelore.fandom.com/wiki/Drokka?oldid=85910"
Community content is available under CC-BY-SA unless otherwise noted.