Elspeth Tirel is a planeswalker who wields white mana. She has powerful magic of community and fortification: spells that build mighty armies, bolster them, and protect them from harm.

Elspeth was born on a plane of strife and darkness. Elspeth had first-hand exposure to the evil of Phyrexia in her childhood, when it ravaged her home plane; it left wounds on her psyche that still plague her today. When her planeswalker spark ignited, she left home and never looked back. She wandered the Multiverse, looking for a world where she could belong, a world that had what her true home was missing: peace, love, and community. She found all those qualities in the shard of Alara called Bant.

With her formidable fighting skills and her devotion to nobility, Elspeth became a knight and champion of the Bant nation of Valeron. She evades questions about her origins, content to build her life around service to her adopted home. She has become a planeswalker with a very unusual trait—she has no desire to planeswalk ever again.

Elspeth Tirel cares deeply about her adopted home of Bant, and the bonds she's forged with her fellow knights there. All she's ever wanted is to find a place where she can hide her gifts, settle down, and feel part of the community - and Bant has been that place for her.

Following the losses on New Phyrexia, Elspeth planewalked to Theros. On Theros, Elspeth hoped the gods would keep her safe from the evils of the Multiverse. But the powerful planeswalker came to the attention of the sun god, Heliod, who believed she was destined to become the Sun's champion. But she had come to escape the horrors of her past and mourn the apparent loss of her friend.

Elspeth first came to Theros as a young girl. She witnessed an epic battle between Heliod and Purphoros and encountered another lost child named Daxos. When Purphoros's sword was swept into the mortal realm, Elspeth retrieved it and fled the plane. Not knowing the sword was forged by a god, Elspeth carried her beloved weapon with her from plane to plane, even learning how to channel her spellcasting through the blade itself. When she returned to Theros a second time, her sword attracts the attention of Heliod.

The satyr planeswalker Xenagos wanted to become a god, and his powerful rituals disturbed the metaphysical boundaries between Nyx and the mortal realm. Heliod blamed Purphoros for the damage to his world, and the two resurrected their ancient hatred against each other.

While living in Akros, Elspeth traveled to a shrine of Heliod just outside the walls of the city. She prayed to Heliod in hopes of understanding Theros's gods better, but Heliod accused her of stealing the sword. When she withstands his magical assault, he's impressed with her power. He transformed her sword into a spear, which becomes known as Godsend. Heliod challenged Elspeth to travel to Meletis and become his champion.

The hatred of Heliod and Purphoros reached a boiling point. Meletis and much of Theros would be destroyed if they were not stopped. Kruphix is forced to enact the Silence, which draws the gods back to Nyx and leaves the mortals to temporarily fend for themselves.

Polukranos, the massive hydra, awoke and began rampaging toward Meletis - and Elspeth. Elspeth and Daxos defeated Polukranos, and Elspeth became Champion of the Sun and earns renown throughout Theros. She dwelled in Heliod's temple compound in Meletis. Daxos, an oracle of Heliod, becomes her friend and mentor. Elspeth loves Meletis and believes she's found a place she can truly call home.

During the Silence, Xenagos manipulated Mogis's minotaurs into attacking Akros. The minotaurs had always wanted to destroy the polis, so it didn't take much for the satyr to convince them to attack. Hordes of both mortal and Nyxborn minotaurs besiege Akros. Soldiers from Setessa and Meletis, including Elspeth and Daxos, came to the polis's aid.

The combined forces of Setessa and Meletis were victorious, and as Xenagos had hoped, they held a great victory celebration. Xenagos transformed this celebration into the Great Revel, a violent bacchanalia. Jealous of Elspeth's blade and hero status, Xenagos wanted to destroy her. Using magic, he manipulated her into killing Daxos on the night of the Great Revel.

Xenagos completed his ritual and becomes a god. The pantheon, horrified by this change of events, blamed the mortals for disturbing the natural state of the world. The conflict between the Nyxborn and mortals escalates. Heliod blamed Elspeth for Xenagos's ascension, and she was forced to flee into the wilderness to escape his wrath. Instead of leaving the plane, she vowed to stay until she avenges Daxos's death and destroys Xenagos. Her friend, Ajani, found her in the wilderness and offers to help.

With the help of Kiora, Ajani and Elspeth made their way across the sea to Kruphix's temple at the waterfall at the edge of the world. Kruphix is himself a portal into Nyx, and Ajani and Elspeth arrived at the "gates" of the realm of the gods.

To gain access to Nyx, Elspeth had to choose an ordeal from one of the gods. She chose Erebos, and he tempted her with a vision of a peaceful home and loving family. She can have eternal peace - if only she gave up the fight against Xenagos and stopped trying to save Theros. Realizing there is more at stake than her personal comfort, Elspeth refused to lay down her sword and resigned herself to Erebos's trick.

Once inside Nyx, they discover that Xenagos had trapped the celestial creatures in fiery torment. As Ajani and Elspeth worked to free them, the God of Revels launches his assault. Elspeth struggled to kill Xenagos until she pinpointed the last vestige of the satyr's mortality and strikes him down with her god-forged weapon. The God of Revels was no more, and the pantheon was restored to its natural state.

The death of Xenagos didn't lessen Heliod's animosity toward Elspeth, and he feared her power as a Planeswalker. Weak and injured, Elspeth and Ajani tried to flee Nyx. But the God of the Sun waylayed his former champion and struck Elspeth with her own sword. He ordered Ajani to carry her back into the mortal realm where she can be claimed by Erebos, God of the Dead. But Ajani was spirited away by King Brimaz's leonin, leaving a mortally wounded Elspeth to die alone near the Temple of the Gods.

Elspeth had bargained with Erebos to release her deceased paramour Daxos from the Underworld in exchange for her own life, so when she descended into Theros's Underworld, she fulfilled her end of the bargain. Erebos released Daxos, but only as a Returned, stripped of his memories. Elspeth still lurks in Theros's Underworld, hammering a golden mask, hoping one day that she'll be able to escape the clutches of the god of the dead.

"Finally, I understand. Home isn't where you rest. It's what you fight for." -Elspeth Tirel (Crusade)

"I was called to this world of steel, and it will be my steel that answers." -Elspeth Tirel (Soul Parry)

"Only by the bravery of those who put loyalty above glory is our home kept safe." -Elspeth Tirel (Guardians of Akrasa)

"Tools and artisans can be destroyed, but the act of creation is inviolate." -Elspeth Tirel (Pristine Talisman)

"It has been my experience that soldiers most fervently follow generals who lead by example." -Elspeth (Archetype of Courage)

"The false god Xenagos treats the whole world as his rollick site. If his whims are left unchecked, Theros will be reduced to rubble and ashes." -Elspeth (Mischief and Mayhem)

"I was not chosen for my faith in the gods. Sometimes the gods must put their faith in us." -Elspeth (Sunbond) 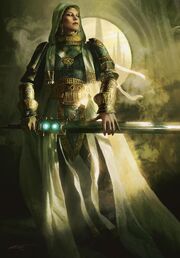 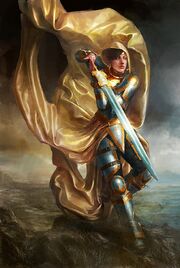 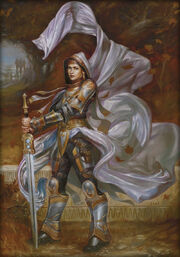 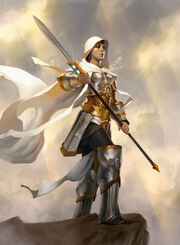 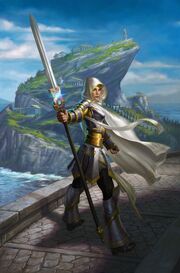 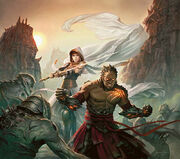 Retrieved from "https://gamelore.fandom.com/wiki/Elspeth_Tirel?oldid=73523"
Community content is available under CC-BY-SA unless otherwise noted.