Griffins are creatures that resemble a cross between a lion and an eagle. They typically have the head, forelegs, and wings of an eagle, and the hind legs, body, and tail of a lion. They are typically fierce carnivores and strong flyers. They appear in many fantasy settings.

To outrace the griffin -Kipamu expression meaning "to do the impossible"

When the cat flies and the bird stalks, guard your horses carefully.

"I abandoned my dream of a squadron of griffin-riders when the cost proved too high. Three trainers were eaten for every griffin broken to the bridle." -King Darien of Kjeldor

Farmers typically keep their flocks at thirteen sheep -one to distract the griffins while they take the other twelve to market.

When an order for griffin barding comes in, blacksmiths prepare their forges for months of exacting work. They know griffins always detect imperfections and never haggle. (Armored Griffin) 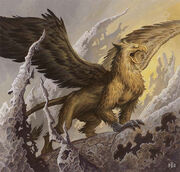 Retrieved from "https://gamelore.fandom.com/wiki/Griffin?oldid=90701"
Community content is available under CC-BY-SA unless otherwise noted.