Luridia is a hilariously macabre fantasy world that must be seen to be believed.

Imagine a world where fiendish cat-headed moneylenders raise the dead and force them to work off past debts; where working-class wizards wear bowler hats and produce magic in factories; where business contracts are enforced by vengeful wraiths; where technologically brilliant elves live for thousands of years but never outgrow juvenile behavior; where feuding armies led by dragons wage a gruesome war over causes long forgotten.

Journey to the city of Clockman, a booming hub of commerce where corruption is revered. Brave the wastelands of Lugubria, where decades of voidal magic have twisted the countryside into a surreal dreamscape. See Castle Direstock, a fascist dystopia of naked rock and brutalist architecture. Discover the top-secret research facility at Acrolos, where grizzled old men and their unruly elfish helpers toil to produce the latest in runic weaponry, Luteoderm armor, and one-legged hopping pogo-bears.

Luridia is an unkind place. One is just as likely to meet one’s death at the end of a sword as from old age or an accident. Wars are common and fought for any number of reasons: honor, power, wealth, hatred, history. In this kind of place, there are those for whom there is no greater joy than the slaughter of a battlefield and the smell of blood.

Luridia is the setting for the Spoils trading card game

Countries and Realms of Luridia 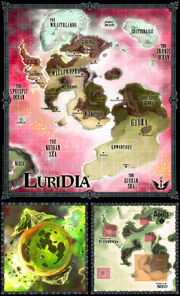 Retrieved from "https://gamelore.fandom.com/wiki/Luridia?oldid=87711"
Community content is available under CC-BY-SA unless otherwise noted.