The Nacatl come from Naya, a world of dense jungles and steep mountains, spiritual elves and hedonistic humans. The Nacatl live in the mountainous regions, spending their night stalking prey and their days sleeping in the vine-covered ruins of their lost empire.

At one time, the Nacatl were the most civilized race in Naya and the undisputed rulers of the plane. In its heyday, the Nacatl's Empire of the Clouds would have rivaled Rome, with an extensive system of roads, bridges, and aqueducts. But internal strife destroyed the empire. A revolutionary group known as the Claws of Marisi waged a guerilla war, shattering the rule of law and bringing Nacatl civilization to its knees.

"The Cloud Nacatl sit and think, a bunch of soft paws. We are the Claws of Marisi, stalking, pouncing, drawing blood." (wild Nacatl) 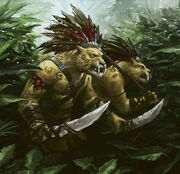 Retrieved from "https://gamelore.fandom.com/wiki/Nacatl?oldid=45175"
Community content is available under CC-BY-SA unless otherwise noted.