The Naga are a race of snake-like creatures. They typically have a humanoid upper body, but they have a snake's body below the waist.

The naga are a mysterious race, and it is frightfully easy to misinterpret their culture. Naga are frequently tied to mysticism in some fashion. Most are reclusive and untrusting of strangers.

Not to be confused with Nagah, who resemble them.

Naga look like enormous snakes with shoulders and arms protruding from humanoid torsos. The Naga of Amonkhet believe in a principle called the Sweetest Harmony, which describes a perfect balance between the body and the mind. Finding that balance, as they understand it, is a sure path to glory in the trials.

Nagas wielding twin daggers excel at the fighting technique known as the Bite of Rhonas.

The forked tongue of the naga is sensitive to drifting scent trails from the past, present, and sometimes even the future.

To prepare for the Trial of Strength, nagas shed their old skin - and with it their scars, their doubts, and their fears.

The snakelike naga of Tarkir are descended from ancient Sultai leaders who made dark deals with rakshasa. Naga are expert at magic that warps both mind and body. Many, including the khan, Sidisi, are necromancers. They are infamous for their cruelty, seeing others only as fodder for their ever-growing army of zombies. 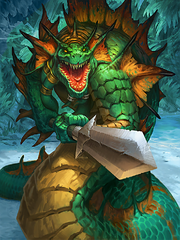 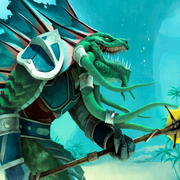 Retrieved from "https://gamelore.fandom.com/wiki/Naga?oldid=85189"
Community content is available under CC-BY-SA unless otherwise noted.