Ophidian Universe
Opac Sentir is known to be one of the leaders of the Shadow Rakaram, a tight-nit and mysterious organization whose exact numbers are unknown. Opac is a unique Spectral, composed of a rare semi-solid core matter. He has some ability to alter his body structure and shape, making him difficult to target from a distance and very lethal up close. 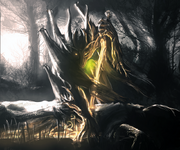 Retrieved from "https://gamelore.fandom.com/wiki/Opac_Sentir?oldid=57475"
Community content is available under CC-BY-SA unless otherwise noted.