Dominaria
Phage was an abomination created by Braids using the influence of the Mirari. Originally, she was Jeska, sister to Kamahl. Phage was a vicious pit fighter whose very touch meant death. Blessed by the Patriarch, her touch has the power to rot, making her the Cabal's deadliest champion yet. As she cuts a wide swath through the pit-fighting ranks, she also seeks to increase the Cabal's power. She will let no one stand in the way of her ambitions.

Phage became both executioner and savior, helping others to the same rebirth she had found. (Aphetto Dredging)

"His sacrifice shall not be forgotten. Now toss his body over there with the others." -Phage the Untouchable (Doomed Necromancer)

"Until the world unites in vengeful fury and Phage is destroyed, I will not stay my hand." -Akroma, angelic avenger (Righteous Cause)

"Choose your next words carefully. They will be your last." -Phage the Untouchable (Cruel Edict)

"Her voice is damnation, unyielding and certain." -Phage the Untouchable (Graveborn Muse)

"Goblins won't betray their own kind for any price. They'll do it for a very specific price." -Phage the Untouchable (Goblin Turncoat)

As Phage drank their energy, a vague memory of Jeska stirred. Then she lost herself again in the joy of her victims' suffering. (Syphon Soul)

The clerics saw her as a divine gift. She saw them only as allies in her war against Phage. (Akroma's Blessing)

"Their blood is the nectar that nourishes the Cabal." -Phage the Untouchable (Blood Celebrant)

"I can't hear them scream, but at least I don't have to listen to them beg." -Phage the Untouchable (Smother)

Few who cross Phage have the chance to repeat the mistake. (Swat)

"I do unto others as others have done unto me." -Phage the Untouchable (False Cure)

"It is from Phage that this evil springs, and to her it shall return." -Akroma, angelic avenger (Infest) 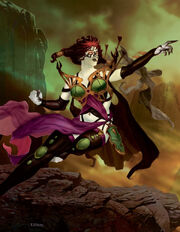