Saheeli Rai is known to the people of Kaladesh as the most brilliant metalsmith of her time. While she is celebrated for her innovation, developing many of her own unique filigreed designs, she is most regarded for her unparalleled ability to create replicas of any creature she sees. Her renown extends well beyond her native city of Ghirapur. Many country-dwelling denizens will be making long treks to the Inventors' Fair just for a chance to see Saheeli's newest creations in person, and perhaps collect an autograph from the famous luminary herself.

Saheeli's powers go well beyond what is commonly known. She is a Planeswalker with a powerful magical command over her artifacts, able to compel them to do her bidding. She can also weave seemingly endless threads of metal into formidable, beautiful creations at will. Many of her designs are inspired by creatures she has seen on other planes of the Multiverse. She is smart and quick on her feet with a bright, optimistic personality. While usually easygoing, Saheeli doesn't hide her competitive spirit, and she has been known to become ferociously cutthroat if anyone on Kaladesh - or anywhere else in the Multiverse - attempts to cross her.

"From the first touch, I know exactly what the metal wants to be."

"Our creations are more than mere things. They have life in them, little bits of ourselves." 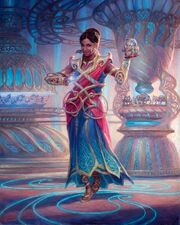 Retrieved from "https://gamelore.fandom.com/wiki/Saheeli_Rai?oldid=84803"
Community content is available under CC-BY-SA unless otherwise noted.