A race of salamander-humanoids. They are amphibious, and prefer to dwell in swamps.

Salamans are highly adaptable, capable of thriving in many environments. This adaptability extends to combat situations as well, as the Ninja has been known to mimic its opponents with precision.

Most salamans have an affinity to the wilderness, but the Picket particularly suited to scouting. For that reason, the Circadians specifically requested a contigent of them to be on the frontlines in the search for Gekaal.

The Salaman of Forglar dared to use the Old World instruments, to ward off aggressive magics.

Salaman Hunters train in secluded locations throughout the Marsh Tongue where they hone their deadly aim. Salaman weapons are nora-bound to their owner and will not work for anyone except their intended wielder.

To become a member of the Elites, a Salaman must have a natural talent with unusual technology. Their war plan hinges upon an aptitude for innovation.

"Lily ponds are especially popular amongst Salaman as they are apparently very good for your skin, and we all know how picky Salaman are about their skin. When I tried it though it just made me sleepy." ~ Gillo's Guide to Poxanthuru

"Bein' round water most t'ere lives Salamans tend ta steer well clear of 'letric, but Daredevils be choosin' ta brandish it as weapon whilst flying in a kite made of sticks. They be madder than me Tortfather after he'd gone kissin' fish." - Mangelshell 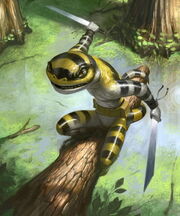 Retrieved from "https://gamelore.fandom.com/wiki/Salaman?oldid=80919"
Community content is available under CC-BY-SA unless otherwise noted.