The Selesnya Conclave is a vast, interconnected commune that constantly strives to recruit new members, valuing the strength of the whole over the individual.

The Selesnya guild sees itself as the voice of Mat’Selesnya, a mysterious consciousness they believe to be the manifestation of nature itself. All within the guild are considered mouthpieces of that singular voice, and they seek to expand their guild by evangelizing their message and adding members. The Selesnya message is personal as well as public: individuals must silence their own consciousness in order to hear the will of their guildmaster, a three-headed dryad who is the spiritual transmitter of Mat’Selesnya.

Originally, the guild was directed by the Chorus, a group of ancient dryads. The Selesnyans make it their mission in life to sow the seeds of their beliefs wherever they can. However, this also involves defending these seeds wherever they take root, the main reason why they have conflicts with the other guilds.

The guild subsumes the identities of individual members, transforming them into instruments of the Conclave. Some citizens think the Conclave is as much of a cult as the Rakdos, and they may not be all that wrong. Every member is a fanatic to the cause, and conformity is not demanded - it's expected as a matter of course. No one is sure whether the Conclave actually brainwashes anyone or not, but many members certainly act like they do.

Selesnya has an immense reach. The guild is spread across Ravnica. Each settlement, called a vernadi, is a small commune built around a central tree and led by a dryad leader. The vernadi expand outward from Vitu-Ghazi, and all are connected through an underground network of roots.

Selesnya members also domesticate what on other planes would be wild, untamable animals. Even on such wild animals, Selesya even outfits these animals with extensive, metallic barding here as necessary.

The Worldmind, also known as the Voice of the Conclave, is the subtle transmission of Mat'Selesnya's consciousness. The Conclave also picks up on experiences and wisdom from members of the guild which they then transmit. The clarity of this wisdom is proportional to the depth of a member's devotion to meditation and his or her service to the guild. Through a magical ceremony upon death, a Selesnyan guild member's full experience (spirit) is "uploaded" into the Worldmind. The deeper a guild member's devotion, the deeper his or her access to the Worldmind. Some of the most devout Selesnyans have the capacity to wield immense power thanks to their connection to the Worldmind.

In a perfect world, the Selesnyans consider all of their leaders, no matter how tenured, to be fallible and mortal teachers, nothing more. However, some of the Selesnyan elders are prone to a bit of self-aggrandizement, due to their own personal ambition ,and take pride in the growth and beauty of their own particular vernadi.

A not-so-well-kept secret is Selesnya's hypocrisy about the taking of life. Because of their doctrine about the sanctity of life, one might believe that they would be stringent pacifists. On the contrary, they have no problem with throwing away countless lives in combat. One of Selesnya's main tactics in battle is to create a living shield of bodies to stall opponents until one of their massive elementals or avatars can show up to destroy en masse. Post mortem, Selesnyans make a large, ceremonial fuss about the sacrifice of noble warriors and how all life returns to Mat'Selesnya, but a mound of corpses is hard evidence to cover.

The Selesnya guild is the guardian of natural and structural beauty. There are entire sections of scrolls and codices within Vitu-Ghazi about the correct way to order the landscape, the best stone to use, how to arrange specific kinds of trees, and the most pleasing way to layer foliage. There are some who believe in keeping every stone clean of debris and some who want to arrange without there being noticeable signs, but all agree that beauty is a crucial value of life.

Roles within the Guild

Breaking of the Guildpact

Mat'selesnya is almost killed by Szadek but Agrus Kos and friends stop the vampire guildmaster before he can drain her entirely. The Selesnyan Conclave is shaken but not destroyed as its guildmaster heals, reforming with a new group of dryads.

After the guilds were disbanded, Mat'selesnya went into a deep hibernation and none seem able to penetrate deep enough into the Worldmind to contact her. The Selesnya guild looked like it was going to fade completely. Trostani is able to restore the link with the Selesnyan parun and developed a deep understanding of her will. Through her, the Selesnyan Conclave is reestablished, a renaissance of Selesnyan culture and architecture issue forth, and the guild is brought back from the brink of dissolution.

"Once you are with us, you are an equal among us. Until then, you are lost," said the wolfrider evangel Tolsimir, an agent of the Selesnya Conclave. The Conclave thought itself a selfless, nurturing, spiritual congregation, but others regarded it as a brainwashing nature cult. 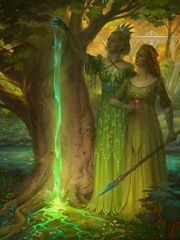