Life evolves in strange ways in the Simic Combine, where researchers grow hybridized monsters in their grotto bio-labs. The Simic believe in augmenting and customizing natural organisms. Their reasons for doing so vary from improving the quality of life for Ravnica's citizens to restoring a balance between nature and civilization in their world. They combine insatiable curiosity with a hunger for growth, forming an academic guild that is passionate about literally embodying its ideas. Their goal is life utilized as the ultimate tool for scientific expansion

The Simic Combine is Ravnica’s steward of nature and the wild; its mission is to preserve and advance the natural world even as Ravnica’s cities continue to grow. The guild seeks to protect the elements of the plane that are incompatible or mutually exclusive with its overpopulated, urban conditions. This is not easy, of course, because the forces of civilization are so prevalent on Ravnica that they threaten to subsume anything that runs counter to them. But the Simic practice a strange combination of detachment and holism that provide a kind of separation from the larger urban systems - a separation on which their conservation mission depends.

Amidst the chaos of Ravnican politics and strife, the researchers of the Simic Combine worked industriously to improve their world. A group of elves and scholars with a vision for improving their world, the Simic are charged with maintaining nature on Ravnica. In ever stranger ways, the Simic "modified" nature so it could survive on a world increasingly blanketed under civilization.

When the Guildpact was first put into place, the Simic were charged with preserving nature, which was already in a death spiral. The vast population, which cared about nothing but themselves, soon made sure that the Simic failed in their original objective. But from this setback arose a new opportunity, and a new purpose: creating a new natural order to replace the one that had been taken away. This new nature would be better and stronger, able to coexist and thrive alongside the now-entrenched Ravnican civilization. Thus, every living thing, from plants to frogs to leviathans to even people, is fair game for a little biomantic manipulation.

Though much of the Simic's work has been beneficial, in the form of medical advances and other such discoveries, it's also resulted in some pretty ugly and destructive monstrosities when a biomancer gets too carried away in his work.

One of Momir Vig's most popular inventions is the cytoplast, a symbiotic amoeba-like organism that strengthens its host, and sometimes even grants other abilities. In fact, there are dark rumors within the Combine that Momir Vig has a very special project spun off this research - a savage, instinct-driven being, based on cytoplastic technology, which Vig believes is the ultimate lifeform. What this being is, and what Vig intends to do with his new toy, is something that only the Simic leader himself can answer.

Following Momir Vig's death, the research into cytoplasts was abandoned. Zegana, the new Simic guildleader, led the Simic in a different direction.

A holdfast is a biological structure that kelp and sponges grow on to anchor themselves to rocks or other objects on the sea floor too heavy for currents to move. In the Simic context, this structure has inspired a philosophical dogma that advises guild members never to stray so far from nature that they become "adrift"—a veiled warning against the excesses and ambitions of the guild's previous iteration. The Simic guild rank and file tends to stay close to their zonots for this reason, and Simic forays into city life are generally shorter than those of other guilds. The zonots themselves are sort of huge columns of sea grass or kelp in negative space, and the ocean far below is the object to which they are "anchored."

The Holdfast Principle doesn't mean the Simic are isolated or xenophobic, however. The opposing idea, stronger in Simic culture, is that of the Upwelling. In science, upwelling is an oceanographic phenomenon in which nutrient-rich water moves toward the surface, replacing depleted water. For the Simic, this is a spiritual concept that bridges disciplines and pursuits. The return of the deep creatures to the surface, the birth of ever-larger organisms, the pursuit of natural science and understandings, the slow addition of new zonots... all are upwellings. The new and enlivened replace the old and depleted, and that replacement is cyclical.

A zonot is a huge sinkhole that leads all the way down to the Ravnican oceans, and each serves as a distinct Simic habitat—sort of an oversized, inverted skyscraper. Each zonot has a different culture, ecosystem, and racial distribution, as well as a speaker.

Simic guild members are organized by clade rather than by species, role, or caste. Each clade is the natural-world equivalent of a project team: diverse individuals adapted to different tasks, yet related by a common goal. Clades often exist solely within a single zonot, but they need not do so, and large clades span two or more Simic communities. Some of the clades include:

Breaking of the Guildpact

The Simic guildmaster Momir Vig, along with the zombie-god Svogthir, the Golgari parun, prepared their own plan to conquer Ravnica. Vig's creation, Project Kraj, was unleashed in an epic battle, clashing with the demon guildmaster Rakdos. When the dust settled, Kraj, along with Momir Vig and Svogthir, were destroyed. With the destruction of the Simic guildmaster and the guildhall in one giant catastrophe, the Simic as a guild is all but destroyed.

In the aftermath of Kraj, the Simic all but collapsed. For some time, there is no replacement for the guild, but a series of massive sinkholes begin opening in remote areas of Ravnica. Below is an ancient ocean, long-since covered by layer upon layer of city. The merfolk race live there, and they remained hidden butaware of the surface dwellers. Only once revealed do they join the surface dwellers, finding a home in the Simic guild. 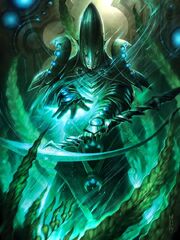