Thaqualm is an extraordinary redeemed villain: a mind flayer who has joined the cause of good. Living deep underground on the outskirts of a mind flayer city, Thaqualm was a victim of a small-scale slave rebellion: Her duergar thralls broke free of her mental control and forced her into three years of wretched servitude, her mental powers suppressed and her body at the verge of starvation. Finally, she was liberated by an adventuring party from the surface who killed her duergar masters but spared the pathetic illithid, showing her kindness unlike anything she had ever experienced before. Eventually, she joined the adventurers and traveled with them for two years. She joined a monastic order, and has now retired to a life of contemplation. She has sworn a vow of nonviolence and works hard to redeem any evil humanoids she may encounter, hoping to set them on the same course that has proven so rewarding for her. 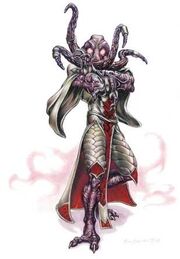