Being totally blind, Voil are not effected by light at all. With sound alone a Voil selects its target, its lance never missing its intended victim.

The Voil grew accustomed to the intermittent lightning storms, learning to turn them against their enemies. As the Voil obsession with electricity grew, so did their bravery in going to its source.

Through instinct, the Voil can immediately return to their home at the first signs of danger.

The Shattered Peaks have become a fortress for the Voil. With many intricate crevices and caverns, they found places to recover. Some of these places became permanent refuges.

The internal structures of the Voil are not widely known to outsiders, though it is clear that the guards in and around the Queen's roost are substantial.

Each Dive Bomber is given a bladed helm and a plated shirt to cover their arms and chest. These pieces are only meant to protect the Voil during a dive, to make sure the collision is most effective.

"My Queen, we have finished training the new Skyhowlers, who should prove to be quite useful for defending our squadrons against ranged assaults." ~ Report from a Voil Sky Captain

Skythrash gain their title through brute force; an actual tally is made of their victories. A Voil with more than a thousand kills is a Skythrash. There is no ceremony for achieving such a feat, only the title.

Voil Stalkers particularly enjoy prey who have gone to ground, utilizing their pet companion to ferret out their quarry.

Voil that show an aptitude for bestial magic are separated from the others at birth. They believe bestial magic is channeled through discipline and rage, two things no Voil lacks.

Amongst Eehiist's grand army, there have been several who disagree with the Voil Queen. When Ruubgaal returned, this group of Voil emerged from the darkness. They wore the armor of the old Voil King.

Some Voil, known as Lifestealers, developed the ability to consume flesh for much more than sustenance! 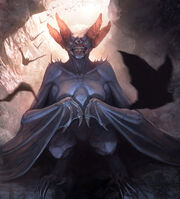 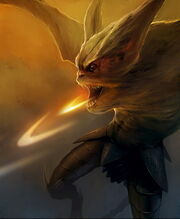 Retrieved from "https://gamelore.fandom.com/wiki/Voil?oldid=80363"
Community content is available under CC-BY-SA unless otherwise noted.