Xenagos was a satyr planeswalker from Theros. As a planeswalker, he was known for magic that stirs up passionate emotions - rage, lust, zeal. He is a powerful spellcaster, and a gregarious trickster with a dark ambition.

Pleasures pursued, revelries enjoyed, mischief undertaken. For the satyrs of the Skola Valley on Theros, these are the virtues most highly regarded. In this sense, Xenagos is the epitome of satyr ideals, and he is renowned even among his own kind for his easy charisma, and for his ability to whip revelers into a frenzy. While he does not rule the satyrs, he savors his role as de facto host at revelries.

Xenagos became a planeswalker only recently. At first, Xenagos saw this power as a way to bring his boisterous, carefree revelry to different planes in an attempt to experience all the pleasures of the Multiverse. What he found, however, was disillusionment. On Theros, the gods were real, but elsewhere, they held no influence. This began to gnaw at Xenagos, who ultimately returned to his home plane. He threw himself back into the revelries, but they no longer provided the same level of amusement.

The natural order of things on Theros has become a farce to Xenagos, the ultimate joke, and he refuses to play the fool. Where once Xenagos lived only for the moment, his newfound awareness of the Multiverse has ruined his ability to lose himself in the bedlam of satyr festivities. However, he refuses to succumb to listlessness, and just as he has been known to push revelries a few steps too far, he is now working on a plan that would elevate him from mortal to god.

No longer content to walk the planes of the Multiverse seeking pleasure, Xenagos returned to his home world with an unprecedented ambition: to become the god of revels. In his quest to propel himself to godhood, the satyr Planeswalker began a series of mystical rituals. He became the god of revels - chaos and ecstasy are his mandates as he whips the plane of Theros into a wild, hedonistic frenzy. His creed is "Come, lose all your self control, be free and join the party!"

The pantheon were ignorant of Xenagos's plan to ascend to godhood, but they recognized that something was amiss. As more Nyxborn beings appeared in the mortal realm, the gods blamed each other for the chaos and, in their anger, sent ferocious Nyxborn creatures against the mortals. Mogis sent minotaurs against Akros, but was thwarted by an army led by Elspeth Tirel. However, the victory celebration after the battle became the ultimate ritual to launch Xenagos into Nyx as a god.

Ultimately, Elspeth Tirel entered Nyx, and struck him down for his insolent crime, using the Godsend weapon to destroy the upstart satyr in a dramatic battle in Nyx. Xenagos's body tumbled out of Nyx and collapsed onto the ground of Theros, lifeless and defeated. Whether he perished utterly, as Heliod hoped, or whether his essence descended into Theros's Underworld, as mortals on Theros usually do, is unknown. So Xenagos's true fate is so far uncertain.

"Why pray to the gods, who feed on your worship? Dissolve your illusions and see the true nature of things." -Xenagos, the Reveler (Annul)

"Stoke a fire hot enough and you'll never run out of things to burn." -Xenagos, the Reveler

"The false god Xenagos treats the whole world as his rollick site. If his whims are left unchecked, Theros will be reduced to rubble and ashes." -Elspeth (Mischief and Mayhem)

"The gods of Theros are born of the expectations and beliefs of mortals. If I have found godhood, what does that say about their true desires?" -Xenagos, god of revels

"Embrace every moment, for it could be your last." —Xenagos, god of revels

Xenagos reveled while Theros burned. (Eidolon of the Great Revel)

"Xenagos has become what he once despised: a tyrant and an oppressor." (Satyr Hoplite)

"Xenagos has fallen, and the world grows dark without him. What can ever fill that darkness but our rage?" -Guruthes, disciple of Xenagos (Revel of the Fallen God) 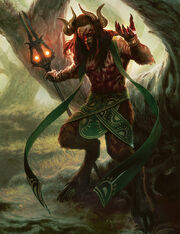 Retrieved from "https://gamelore.fandom.com/wiki/Xenagos?oldid=43979"
Community content is available under CC-BY-SA unless otherwise noted.